With a view to the Golden Gate, San Francisco’s postcard, the Global Philanthropy Forum (GPF) took place in November. In celebration mood, after two years without face-to-face meetings, the event brought together 160 participants over two days of programming. The Brazilian delegation, led by IDIS, was once again present, with 11 members from different organizations.

Racial and Gender equity, local and trust-based giving, and philanthropy’s contribution to the fight against climate change were some of the GPF themes present throughout many of the event’s debates. 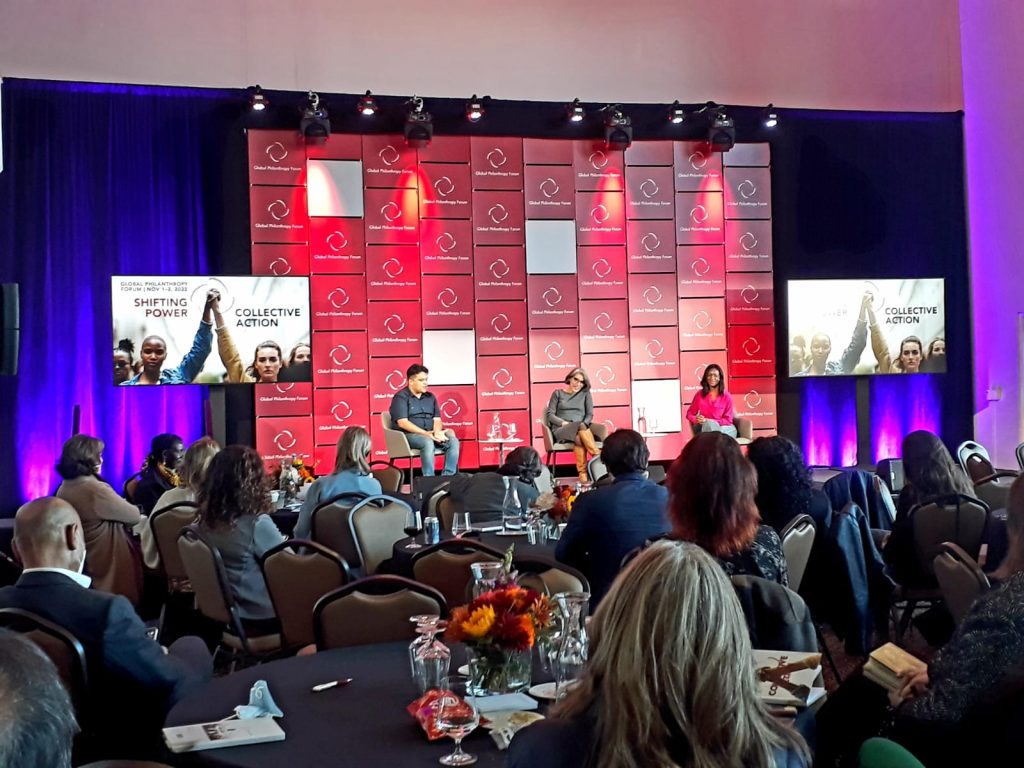 The opening plenary had as its theme ‘Democracy under Threat’. Authoritarianism, disinformation, hate speech and attacks on human rights are evident in many parts of the world. The challenges are not few, but as speaker David Litt said, “people still want to live in a democracy” and that’s why there are so many initiatives that pave the way for a more promising future. Examples include actions to reduce polarization based on building relationships, crowdfunding and strengthening of institutions. In this session, as in others throughout the day, the importance of a helathy information spece, with independent vehicles and the safety of journalists, was highlighted.

Racial justice was the focus of the second session of the event, but it permeated a number of other conversations. Angela Glover Blackwell, activist at PolicyLink, was interviewed by Philip Yun, CEO of the GPF, and drew attention to the fact that the fight for equity is known to blacks, but whites are still not comfortable talking about racism and we must find ways for them to develop that muscle. Angela spoke the phrase that became the mantra of the event – ​​“hope is a discipline”. She reinforced that talking about racism requires discipline and that better narratives are needed, as there are many stories that can be told. She highlighted that it is necessary to change the system based on oppression to one where generosity is the engine and that it is with equity that we will all progress.

In a session that focused on impact businesses led by blacks and browns, it was stressed the importance of unrestrited giving, so that organization may invest in their priorities and eventually make mistakes. On the other had, philanthropists shoulnd´t face out. They can be close, contribute to reflections and offer training and capacity building. For the next year, the GPF announced that it is interested in bringing a session based on a study on donors of colour, carried out by the Lilly Family School of Philanthropy.

Several debates focused on philanthropy. One session addressed the role of donations in building a more equitable economy, the other a reflection on how to invest in local knowledge. There was a workshop on how to structure giving circles and encourage giving from a community perspective. And of course, a plenary session showcased innovative models. The importance of trust-based giving, and long-term support was mentioned at every table. According to Glen Galaich, CEO of the Stupski Foundation, “we waste time over complicate things, while our concern should be just donating resources”.

There were many speeches about the importance of social agents being able to invest their energy in action and not in such detailed rendering of accounts. The idea was also defended that donors should be analyzed by their grantees and receive grades for that. The issue of greater willingness to risk was sometimes related to a way of solving complex issues: it is necessary to act and failure can bring great learning and even lead us faster to lasting solutions. Degan Ati, executive director of Adeso, an organization in Somalia, brought some figures for reflection: only 12% of foundation resources are destined for the global south, and 0.076% is earmarked for youth initiatives. “Transformative philanthropy must change these numbers, while giving visibility to the generosity and small donations that happen daily among the most vulnerable,” said Degan.

Another very important aspect was the look at the donation from the local perspective. Canadian activist Yonis Hassan called attention to the change in narrative – “it’s not a charity. Donors are not helping organizations. It is the organizations that are helping donors achieve the change they want to see.” He was very emphatic about the importance of funding organizations that operate in a specific territory and strengthening leadership. The indigenous Nemonte Nenquimo, in turn, told her story of fighting for the right to land and protecting forests in Ecuador. In its movement, it brings together indigenous people affected by state action and those who still live in more isolated lands, as well as international agents that contribute to articulation.

It is estimated that the equity of American foundations invested in funds is 160 billion dollars. These resources are ‘stopped’ and that’s why the debate on management is big in the country. The #HalfMyDAF movement advocates that half of these amounts be transferred to CSOs and proposes to match everything that is donated. Along the same lines, Glen Galeich points out that “foundations today are just part of the financial system and that money is just circulating to generate more money”. Increased speed of resource transfer, transparency, accountability, blended finance and venture philanthropy mechanisms were explored. The duration of funding was also highlighted. For Carlos Saavedra, executive director of the Ayni Institute, “transformation takes time. Donations for just 1 year is nothing. Financing must be between 3 and 10 years.”

The issue of global health, based on the experiences of the pandemic, gained a specific session. “Covid was a magnifying glass, revealing the inequalities in detail,” said Chet Hewitt, CEO of the Sierra Health Foundation. The importance of social organizations at this time was highlighted, the legitimacy that local leaders had to guide the population and how they were crucial partners for the public power.

Empathy and collaboration as basic elements for the advances we want to see were present throughout the event, which included in the agenda several moments for interaction between participants. “I had the opportunity to meet people with very interesting experiences and exchange points of view. By participating in the event, I broadened my horizons and I believe that interesting partnerships may emerge.” comments Luisa Lima, communication and knowledge manager at IDIS, and also responsible for producing the Brazilian Forum of Philanthropists and Social Investors, the local version of the GPF.

Brazil at the Global Philanthropy Forum

Led by Paula Fabiani, CEO of IDIS, and Luisa Lima, the GPF delegation had the participation of Antony Assumpção and Rodrigo Lowen (Hospital Pequeno Príncipe), Carolina Barrios (Fundação Maria Cecília Souto Vidigal), Daniela Grelin (Instituto Avon), Fernanda Quintas and Rosalu Ferraz Fladt Queiroz (Solidarity League), Guilherme Barros (Lemman Foundation), Juliana Depaula (BTG) and Nicole Rodrigues Carnizelo (Santa Plural Association). As partners of the event, IDIS annually organizes the trip, strengthening the relationship between the participants and with the global philanthropic community. Interested in participating? Contact us. The GPF does not yet have a set date, and will be released to our community as soon as it is announced.